Several weeks have passed since our last status update and a lot has been going on around SystemTestPortal in the meantime, thus an update is really overdue! One of the most visible changes might have been our all-new logo, but there are so many more exciting news would like to share in this status update!

First of all, FOSDEM 2019 was a fantastic experience! For the stand, we decided to use an old IBM Thinkpad T43 on purpose, so everybody would believe in how low the requirements for running an instance of SystemTestPortal really are. We had an amazing number of visitors at our joint stand and gave hundreds of quick live demos of our system. Luckily, also three developers of postmarketOS stopped by and promised to seriously consider using SystemTestPortal in their great project. Here is a picture of the “Open Source Test Management” stand, together with our friends from KiwiTCMS and ReportPortal: 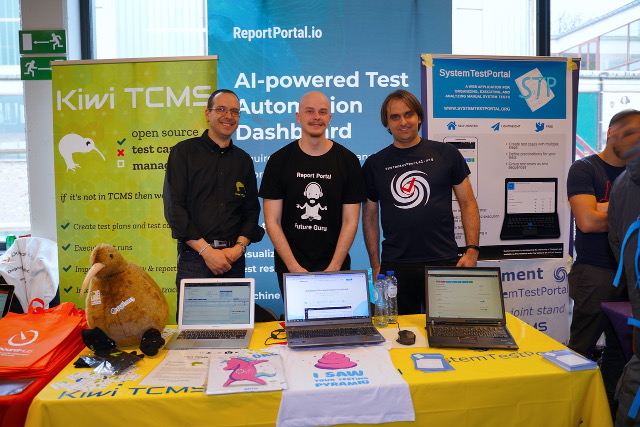 We have also had our talk proposal accepted for the Augsburger Linux-Infotag in Augsburg and delivered a 45-minutes talk about how SystemTestPortal could help to grow communities of free software projects. Not having a stand allowed us to visit a number of interesting talks and discuss software testing challenges with various FLOSS developers.

We supervised a Bachelor Thesis project that produced a workshop concept so that school children could use SystemTestPortal to test autonomous driving functions implemented in LEGO Mindstorms robots. There are two more similar workshops planned for this year, so there is a lot of preparation work to be done in order to make them a success.

We are in the process of finishing the planning of a project in which around 30 mechanical engineering students working in groups of two will use SystemTestPortal to develop test suites for a popular free and open source system that lacks a good test suite. We hope that this will result in some great test suites that can be committed upstream.

We have applied for giving presentations at two more FLOSS events this year. Let’s see if we can convince the organizers to get our proposals accepted.